Just a quick recap of events leading up to where we are now. We were all sick with a cold the last couple weeks of March, Lisa and I got better and Whitney didn't. She got to where she didn't want to do much and was complaining of abdominal pain. Lisa decided to take her to our primary doctor in Lawrence on Friday March 28th. Our doctor performed an exam and did a blood test. He didn't like the white blood cell count and told Lisa to take Whitney to the emergency room at LMH. Whitney was diagnosed with having leukemia at LMH and Whitney was transferred via ambulance to the University of Kansas Hospital.

Through testing at KU Med, Whitney was further diagnosed with Acute Myeloid Leukemia (AML) and was also found to have a FLT3 gene mutation. Current treatment practice for this specific condition calls for an aggressive chemotherapy treatment to get the cancer into remission and then perform a bone marrow transplant during first remission. Overall 5 year survivability rates with this treatment path is about 50%. If the transplant is not performed during the first remission the survivability rate drops to about 20%.  I do feel that the survivability rates are a little misleading in Whitney's case as the common demographics for this diagnosis is a 60 year old male. After discussion with the doctor we feel that we are looking at about an 85% for Whitney. This isn't something that I have really discussed publicly before as it is a little touchy, but I think it is important to understand as we move forward.

This is why I have been pushing information on bone marrow donation as it truly is the difference between life and death in these cases. I hope that by me sharing this information as I learn about it will help educate all of us on the subject. I know I will be more active with this cause in the future as I have learned the importance of it.

This sets the stage for some discussion that I need to vent about and also try to wrap my head around. As is the case with most medical treatments of this nature, there is very little talk about money up front on any procedure that is performed. You walk into this environment with an open checkbook, how do you put a price on the life of a loved one? Through side conversations with staff I am under the impression that most people are way under insured and underfunded for the treatment of this type illness. I think that most of the primary treatment path is developed and ran with this in mind.

What I am struggling with here is we were trying to get the transplant process started as soon as possible and we couldn't get any straight answers on matches, or even get a rough game plan on what we were doing. As we were discussing this there was a comment made that if we understood that this was a very expensive process. We answered that we have good insurance that should cover it and then we learned that the hospital showed that insurance was denied. Long story short, the hospital made a couple of clerical errors entering information. Once that issue was resolved we learned later in the day that they had found 5 matches for Whitney and that they would initiate the harvesting process on 4 of the donors. Great news for sure, but it was a close call. If we didn't have a good insurance policy I'm not sure we would have been so lucky.

Just to give everyone an idea of what we are talking about here, the transplant process is estimated to be around $800,000 This will be on top of the initial treatment to get her into remission which I am guessing will be close to $400,000. With our insurance covering a vast majority of the bill we are guessing that we are looking at $10,000 that will be our share. Getting cost on this stuff is a nightmare, as I don't think anyone has a clue. I do know that some of the initial bills from LMH have come through and they were around $6,000 and they didn't treat her there, just diagnosed and transferred.

We are also looking at treatments from the transplant lasting until August or so. Thus we are talking about renting an apartment in KC for that process which will increase our cost and of course the travel cost and such. To further complicate issues, Whitney is due to come off of my insurance policy on her 26th birthday. This will happen in June right in middle of the transplant recovery. We have a few options that we are working on to address this, but that is something that I had to work on this week.

Well, enough of the business side of Whitney's Journey. Whitney is starting to show small signs of recovery and entering remission. Her vomiting is getting less frequent, her white blood count has stopped dropping and she is in general better spirits. She still has a long ways to go before she is back to her old self, but each day gets a little better. She is getting where she can start seeing people again, as long as you aren't sick or in contact with someone who is sick. Still no children and the same rules still apply on foodstuff and flowers.

Here are a couple of pictures from Saturday. 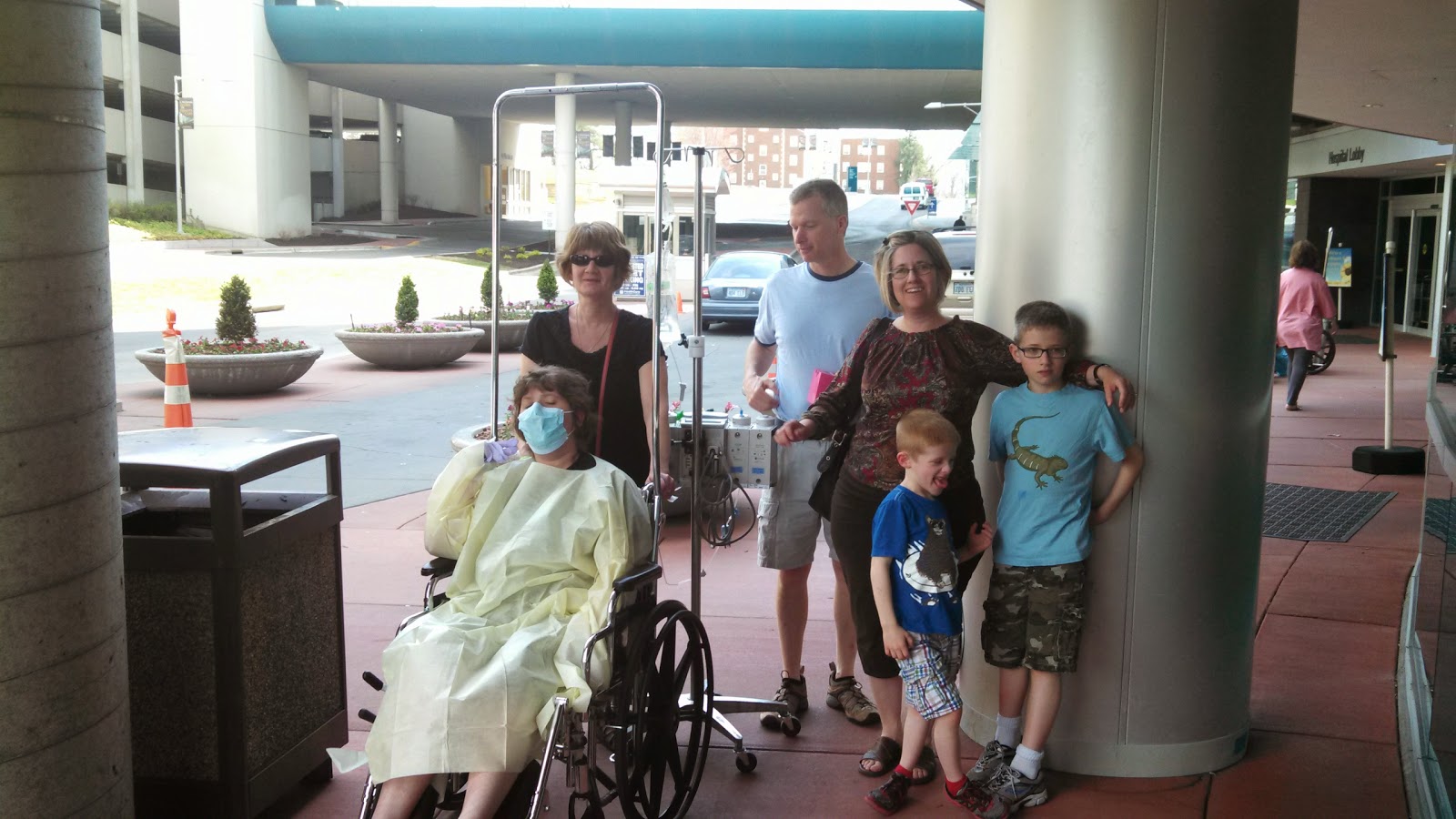 Posted by FireChiefD at 1:40 AM