Posted by FireChiefD at 12:26 PM No comments:

Posted by FireChiefD at 12:23 PM No comments:

Register today to come out and walk with us and honor Whitney's memory.

Donations can be made through this link.

Posted by FireChiefD at 1:25 PM No comments:

Miss Whitney lost her fight with Leukemia on September 22nd, 2014.

We knew when the cancer came back so quickly after the transplant that we were in trouble. The treatment path we chose was what we thought gave her the best chance to beat it, but her poor battered body couldn't handle the treatment and her liver failed. It has been 2 months since she left us and I still cry as I try to write this. Things turned so quickly and our world was so chaotic that I didn't write any blog entries since her relapse.

I turn back to this blog as our plans for her legacy come together. We knew right away that we needed to honor her love for the University of Kansas Women's Basketball program, so we sat down with them and decided that the best way to honor Whitney and help the team was to endow a Women's Basketball scholarship in Whitney's name.

Whitney won't be able to out live us herself, but with your help, her memory will.

We are doing good job of raising money for this, but we still have a ways to go. I am asking for your help to keep Whitney's story alive. Donations are tax deductible and even the smallest amount helps.

Donations are eligible for Williams Fund credit if requested. 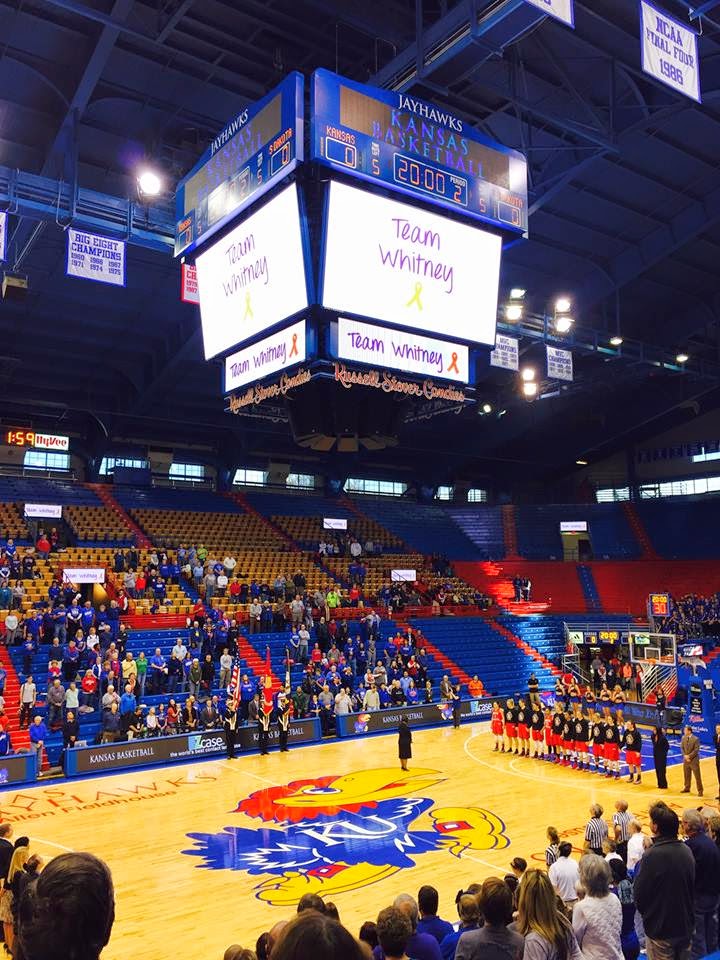 Posted by FireChiefD at 9:34 PM No comments:

Whitney started feeling a little "weird" last Monday, August the18th. She told Lisa that it felt like the cancer was back. She showed signs of CDF and the doctors started treating that. By Thursday her blood counts were a little off and the doctors ordered a bone marrow biopsy. The biopsy came back full of cancer cells that were just starting to make it to her blood stream.

We met with the doctor on Monday the 25th to figure out what to do. He said that given how strong and fast this cancer is coming back, we were in trouble here. We decided to try a drug newly approved for chemotherapy that shows some promise on FLT3 positive patients. We are looking at a 20% chance that we can get her back into remission. Our only other real option was to go back in patient with the same type of heavy chemotherapy that we started off with. We are looking at about a 20% chance she would make it through the chemotherapy, much less get into remission.

Given the overwhelming bad odds we are dealing with here we really want to be sure that Whitney could try to do some of what she wanted to through this process. We discussed time frames and windows of opportunities. We decided that we were not going to put her back into the hospital and try this newly approved treatment. Current plans are for two 28 day cycles and re-evaluate. No promises and no guarantee of a cure. We are going to try and get her home often and get her to the basketball games as we can.

Live each day to it's fullest, tomorrow is not a given.
Posted by FireChiefD at 8:28 AM No comments:

Whitney will be starting the transplant process this Saturday morning with an outpatient chemotherapy treatment.  Prior to receiving the donor's blood stem cells, the doctors must destroy Whitney's immune system so that it doesn't attack the new stem cells. This will be accomplished by another round of chemotherapy along with whole body radiation treatment called Total Body Irradiation (TBI). The TBI treatment must be within 24 hours of the actual transplant, so timing is critical. The actual day of transplant is Wednesday the 18th and the TBI is scheduled for the morning of the 18th with the transplant expected to take place on the evening of the 18th.

We had been under the impression that this was going to be an inpatient process for the first 30 days and then transition to an outpatient process for the next 70 days. After some discussion, the treatment team decided that the best option would be to try a less aggressive process to destroy her immune system due to her secondary issues. This puts us in a completely outpatient process for all 100 days. We weren't ready to get a place to stay in the city yet and this last minute decision has left us scrambling for accommodations. We have options and will deal with this just fine, we just weren't ready for it and that irritated me.

We will have to be very selective about Whitney's exposures during this process and this is the primary reason why we want to get a private apartment. We will also be limiting visitors during the initial phases of the process to help avoid as many exposures as possible while she is in a compromised state.

I am also working on a recap of Whitney's "vacation" and I might get it done tomorrow night if everything works out.

Whitney will get to come home later today for a welcomed break in her treatment process. We know at this point that she will get to spend the memorial day weekend at home with us. She is schedule to go back Tuesday, as an out-patient, to get her next bone marrow biopsy and the sinus polyp removed.

Where we are in the big picture of things is we are just finishing up what they call the induction therapy part of the treatment path. The goal of induction therapy is a complete remission of the cancer. We don't expect to get the results of the biopsy until Wednesday to know if the cancer is in remission or not. Either way she should get a couple week break before her next options are initiated.

If the cancer is still present in Whitney after these two rounds of chemotherapy, the disease is then classified as what they call refractory AML. At this point we will probably have to do much more consultation and seek a second opinion from another hospital. Not a path we want to venture down.

Hopefully the cancer will be declared in remission and we initiate the transplant process.Here is a brief explanation of that process from cancer.net:

Changing the subject a little, the neurology team has diagnosed Whitney with an additional disorder called Dystonia. The definition of Dystonia from the National Institute of Health is:


Dystonia is a disorder characterized by involuntary muscle contractions that cause slow repetitive movements or abnormal postures. The movements may be painful, and some individuals with dystonia may have a tremor or other neurologic features. There are several different forms of dystonia that may affect only one muscle, groups of muscles, or muscles throughout the body. Some forms of dystonia are genetic but the cause for the majority of cases is not known.

This would be what Whitney is referring to as her shakiness. It is the twitching that people have seen when they visited. This disorder would be in addition to her Cerebral Palsy that is causing the posturing or the rigidness. Reading through the material on this, I think this has been an underlying issue that Whitney manages to keep suppressed when she is completely healthy. The biggest concern at this point is if the chemotherapy has made it worse, or if it is just fatigue. The answer to that question will come with time.

I will sign off for now as I must get the castle ready for the arrival of the princess arrival later today. I will provide updates on the facebook page as things progress today.

~Doug
Posted by FireChiefD at 8:38 AM No comments: